The Kundalini is considered by many to be the most powerful force in the Universe, and such power must be respected.  Within every human being exsists the Kundalini force, sleeping or awake!

The Kundalini is a divine, primordial energy with many names and many secrets.  Although Kundalini is mainly associated with Hinduism it parallels in many of the mystical and gnostic traditions.

The knowledge of Kundalini is transmitted by the esoteric branches of all of the great religious traditions. Down through the ages, knowledge of this spiritual, divine, primordial energy that dwells within each human being has been known … often guarded as secret knowledge and spoken of in veiled symbolic language.

It has been written about for centuries by different religions and cultures, each with their own name attributed to this divine energy and symbolism. The knowledge of Kundalini is present in the mystery religions of ancient Greece, Egypt and Rome, in the Kabalistic traditions of Judaism, the teachings of both the Gnostic and Neoplatonic traditions and in the personal testaments of the great Christian mystics.

A mystical force with many names … The Holy Spirit, Jacob’s Ladder, The Holy Grail, Serpent Power, Shakti, The Holy Ghost, The Living Fountain …

The word Kundalini is derived from a Sanskrit word meaning “coiled”, envisioned either as a goddess or as a sleeping serpent  The i at the end of the word Kundalini expresses a feminine energy and is often viewed in a mythological context and believed to be an aspect of Shakti, the goddess and consort of Shiva.

The primordial dormant energy of Kundalini sleeps at the base of the spine, as a serpent, coiled three and a half times around the triangular bone known as the Sacrum.  Modern medicine’s symbol of healing, the caduceus symbol is said to be an ancient symbolic representation of Kundalini.

Kundalini experiences are often understood in terms of the Hindu chakra system, the energy vortexes located within the subtle body along the spine. The Kundalini in the form of a coiled serpent, resides within the Muladhara Chakra, the first of the seven main chakras.

The seven main chakra centers can be seen as the human journey, and are also known as the seven stars, the seven seals, seven chemicals in the chemical transmutation, seven heavenly cities, seven planets, seven stages, seven halls, seven gems, seven churches of Asia, among the many other symbolic representations for these energy vortexes … The seven chakras, or seven seals represent seven blocks or the seven basic mistakes that stand between an individual and their highest potential. 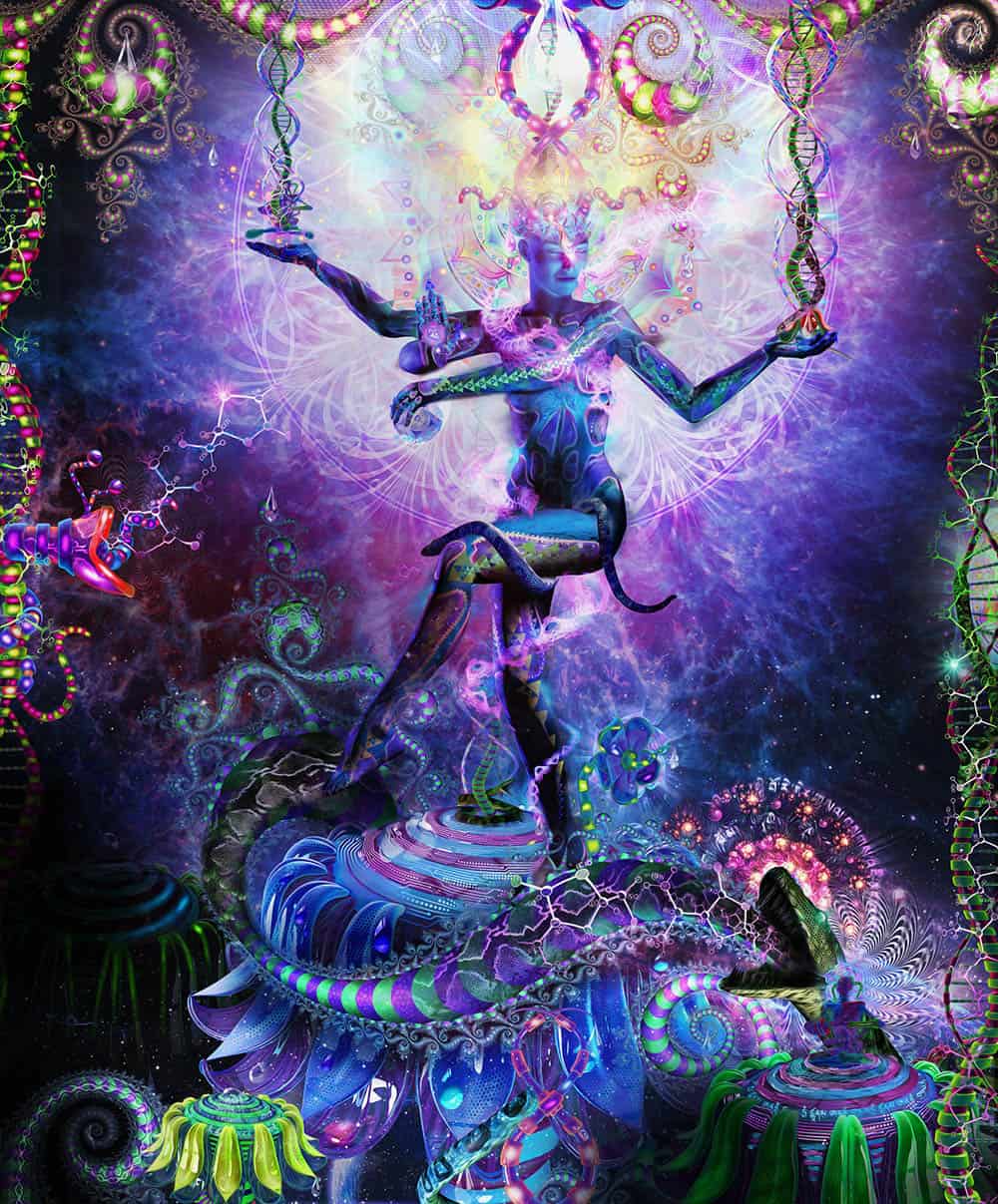 Kundalini is a mothering intelligence, a rich source of energy in our unconscious that springs into action once awakened.  The Kundalini is there to nourish, to heal, to look after and to give an individual a higher and deeper sense of self and of life.  It has tremendous power and healing capabilities.  The Kundalini is the same energy that has created the universe and continues to create.  We are blessed with this serpent power that acts as a loving, guiding mother …  In an awakened state the Kundalini is an incredible agency of transformation, spiritual growth and enlightenment.

Under certain circumstances Kundalini is aroused and awakens, initiating a long transformative process.  It is triggered by spiritual practices, Shaktipat from a guru, a near-death experience, childbirth, menopause, yoga, prayer, bodywork, meditation, psychedelic drugs, a life crisis (such as extreme emotional trauma), certain ascetic or sexual practices and even spontaneously without reason or warning.

When Kundalini energy is aroused and awakens, it begins to rise up the spine, and as it passes through each of the chakras it activates the issues associated with that chakra.  The entire energy body is being rearranged during this process.  Kundalini releases stored and blocked energies in each chakra, so anything repressed or buried will surface along with other emotions, memories, karma and impressions associated with the chakra.

The Kundalini energy can be felt as a warm or electrical feeling of energy traveling along the spine, progressing upwards in the body rising towards the heavens …

Teachers of Kundalini meditation, warn neophytes of the potential dangers of experimenting with Kundalini.  It is important to prepare for this powerful force through cleansing, purification and strengthening practices.  If your wires, meaning nadis, cannot take the Kundalini voltage you will get a burn out.  Spiritual practices such as yogic breathing and yogic asanas will strengthen and cleanse the nadis. You can also purify through devotion, selfless service and meditation.

Side effects of not being prepared for Kundalini are psychological conditions, dis-ease and sometimes (although rare) even death. Mother nature does have safe guards so that Kundalini cannot get activated to early most of the time, as your soul will awaken this energy at the appropriate time.  If forced however, through drug use and unhealthy practices it can and will be released … This warning is not to be underestimated.  If this worries you, practice cultivation of egolessness in your day to day affairs.  Remember that the choices that you make are important, as you are a part of Universal oneness.

Note that when using herbal preparations, such is that in Shamanism, it is said that the spirit of the plant will protect someone from taking to much.  This rule does not apply with extracts, as they become more like drugs … stripped of the spirit’s essence and life force!

The key is to rid yourself of egoism and if it happens do not fight this force of nature, rather allow it to do what it does … cleansing, purifying, enlightening, connecting you to divine will and your highest and brightest star potential …

Do not fight it, rather EMBRACE IT!!!  ALL IS WELL, YOU ARE SAFE & YOU ARE LOVED! 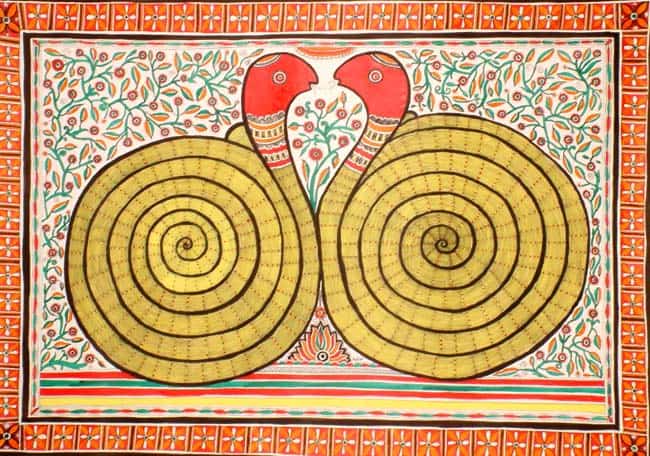 As Kundalini passes through the chakras and activates them, it pushes through any blocks and locks.  Any buried experienced that went unprocessed resurface … Kundalini reactivates everything that you have ever had at once, including the things that you have not allowed yourself to feel and it can become …  a hell ride … flushing these emotions out … and you cannot stop it.

The purpose is to cleanse and burn away the old. Kundalini can be seen with two faces, the first destroys anything negative, worn out and no good.  The nature of Kundalini is extremely healing and once it burns away and breaks down that which is no good, the second face of Kundalini will then rebuild and regenerate.  Kundalini is electric in nature and it begins with heat burning out negativity, then becomes purifying with intense electricity!

One thing is certain, you can never be too prepared for the energy that has created the Universe, to awaken inside of you!

Ways to prepare for your Kundalini Awakening

Kundalini is a powerful force that when activated and awakened correctly within you, will change your life for the better!

StormJewel Says: Thanks for this fascinating article on the power of Kundalini Awakenings.  Here is another great article on the subject and a fantastic blog for you to check out. The Yoga Lunch Box

Posted in How To Articles, Spirituality and tagged Kundalini

I thank you for your time, insight, input and contribution towards a lovely happy reading and I hope I do write more to you in the future -if it's not too much - as you and storm are my favorite with all due respect to EVIE her efforts are highly appreciated too Kindly do accept my deepest gratuitude to you and all storm jewels team from assistants to psychics and I hope to be welcomed in the future for more readings, in addicted to this website and I cannot tell you how many times I've went through all your readings all to relate and have that omg moment we're things are either unraveled slowly or have happened but I was too obsessed or blind to see it, I'll always include you in my prayers for you've given me insight and made me feel good about myself to actually decide properly and perhaps give it time or move on Once again THANK YOU with all my heart and I look forward to doing a reading with you in the future kindly pass on my sincerest and deepest gratitude